Bansko in Bulgaria best option for families, and cheapest overall

In-resort costs have slid as much as 23 per cent compared with last winter, a survey by Post Office Travel Money in partnership with Crystal Ski Holidays found.

The 23 per cent fall was in the Andorran resort of Soldeu, one of 19 destinations out of 27 surveyed where costs were lower than last year.

The survey covered costs such as equipment, six-day passes, lessons and food and drink.

Priciest of the European resorts surveyed was Zermatt in Switzerland (£687).

The best-value of the six North American resorts surveyed was Tremblant in Quebec, Canada, where the costs were £566. Costs in Breckenridge in Colorada, US, have fallen 17 per cent to £682, but they have risen 21 per cent at another Colorado resort – Winter Park – where costs are £607. 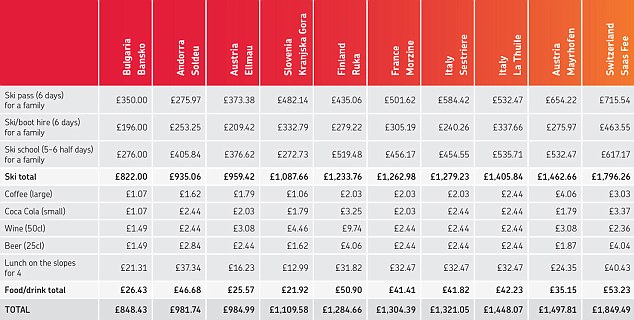 Andrew Brown of Post Office Travel Money said: ‘Although skiing is still cheapest in Bulgaria and Slovenia, growing competition for business means there are great bargains to be struck in many of the most popular European resorts this season.

‘What’s more, the continuing strength of sterling against European currencies provides the added bonus of more pounds in their pockets for UK skiers.’

Among 10 World-Class Resorts surveyed, prices are down 13 per cent in Sestriere to £354, making the Italian resort best value in this category for the second year running.

There has also been a 16 per cent fall in Courchevel (France) to £503, although the reverse has proved true in Zermatt (£687). High ski hire and lift price charges will make the Swiss resort 16 per cent more expensive than last year and highest-priced overall in Europe.

There has also been a 16 per cent fall in Courchevel (France) to £503, although the reverse has proved true in Zermatt (£687). High ski hire and lift price charges will make the Swiss resort 16 per cent more expensive than last year and highest-priced overall in Europe.

In the Best for Families category, Bansko (£848) remains the cheapest skiing for a family of four. However, Kranjska Gora (£1,110) has lost its runner up position because of a significant 18 per cent price fall in both Soldeu (£982) and Ellmau (£985).

Mr Brown added: ‘It’s great news that families can look forward to lower prices in most ski resorts this season. However, it is important for them to check all the resort costs they will face and add these to the package price before deciding on a ski destination so they have a true picture of what their holiday is likely to cost them.’

In almost all cases the charges for these are payable once holidaymakers reach their resort and can add hundreds of pounds to the cost of a skiing holiday.

‘Enthusiasts can now try out a wide range of winter sports activities but these extras come at a price and careful budgeting is needed to make sure the ski budget does not go ‘off piste’. Paying on plastic can incur transaction charges and so too can using an ATM abroad, said Mr Brown.

If you want to learn first about promotional offers, subscribe to our newsletter.